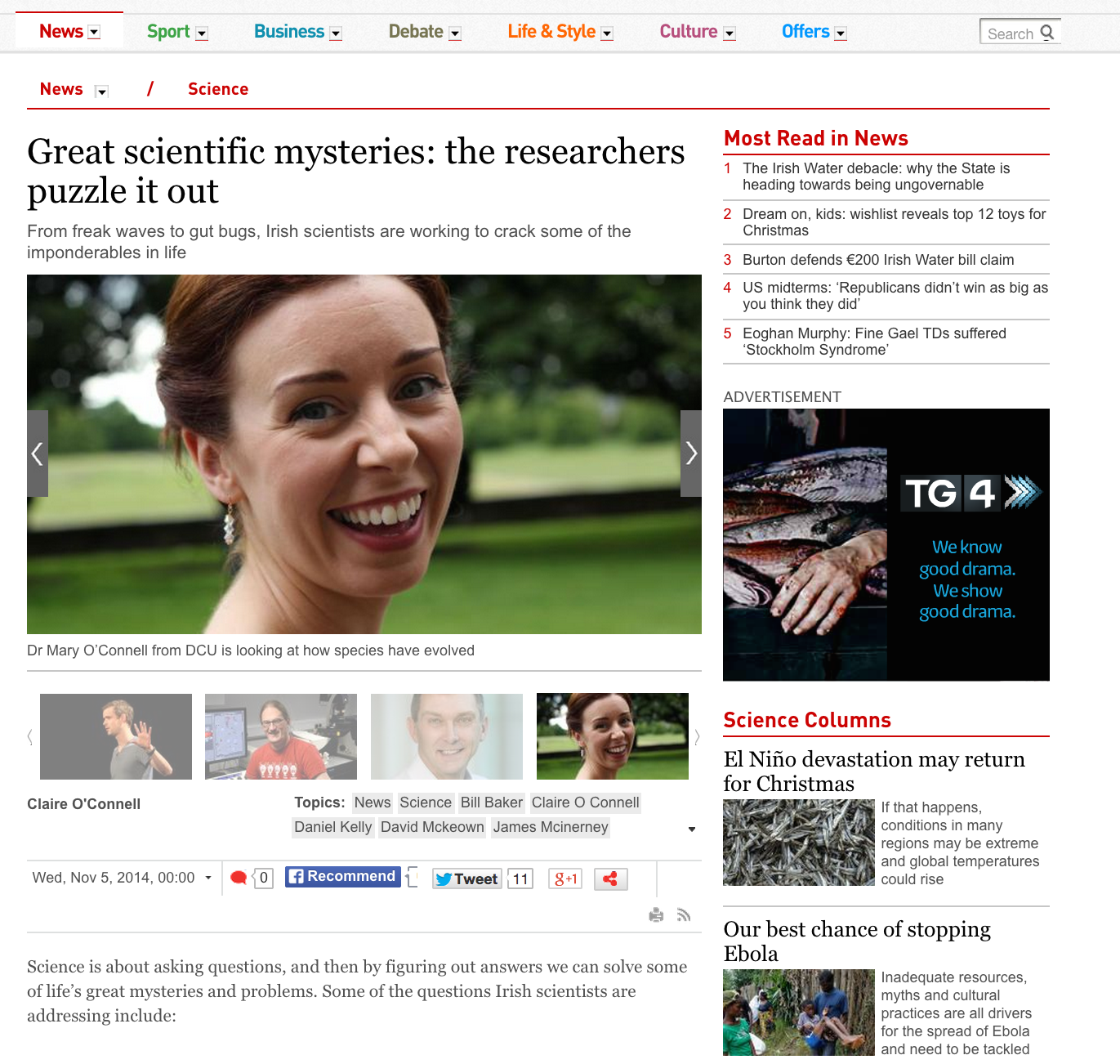 Our research was featured in the Irish times today (5th November 2014). I think it is wonderful to bring fundamental research to the general audience. The business of understanding life and how it works underpins all of our therapies and treatments for the future … this is where it all begins … http://www.irishtimes.com/news/science/great-scientific-mysteries-the-researchers-puzzle-it-out-1.1964445 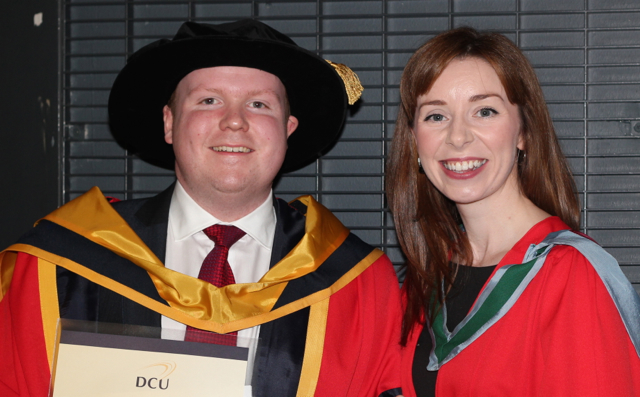 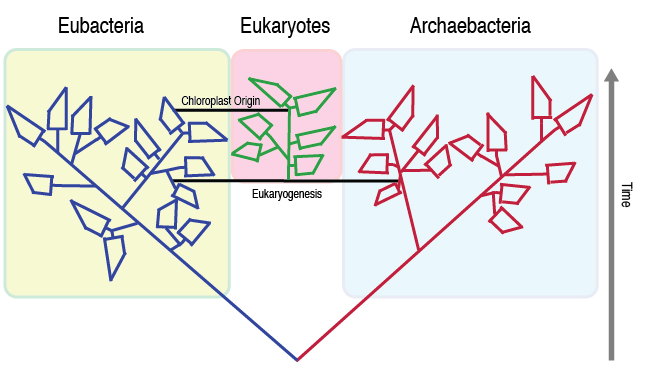 Today we published a manuscript that summarises the current knowledge of the evolutionary history of the cellular life forms on the planet.

This is not an easy task and involved evaluating a lot of manuscripts to see what they had to say on the matter.

In the end it became obvious that the evidence for autogeneous origins of eukaryotes have been based on some very shaky data, or in some cases, only on the argument that this is nature’s default. This would mean that you felt that Nature has a default mode of operation.

You can read about the detail in the full paper, but if we are correct on this, then it should mean that there is a significant apraisal in the textbooks of what we consider to be the default for evolution. 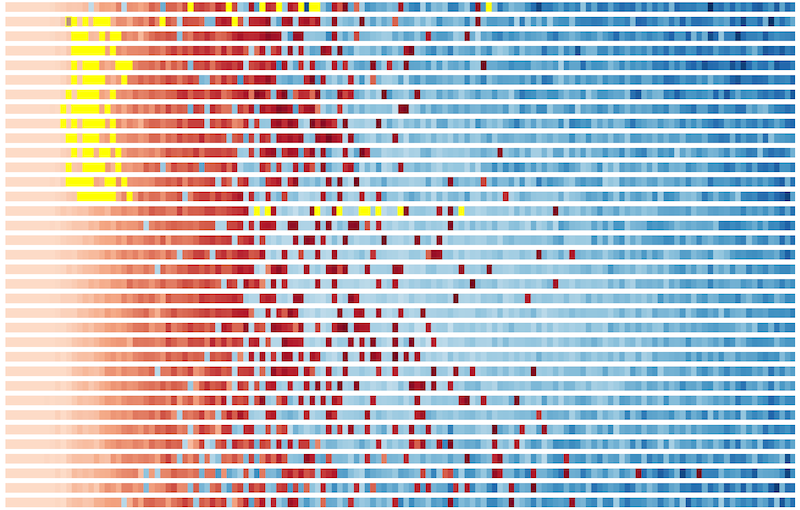 Conclusions: This simultaneous miRNA/mRNA transcriptome profiling allowed us to predict with high accuracy target genes of myogenesis-related microRNAs and to deduce their functions. 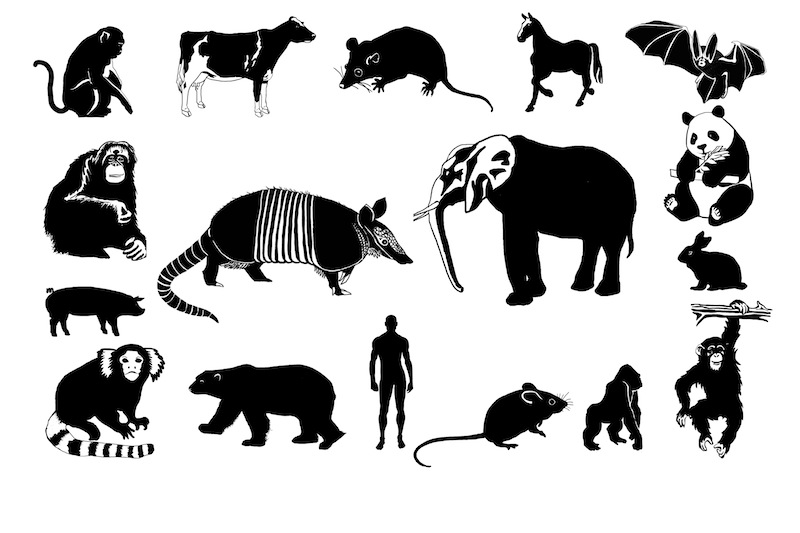 How are mammals related to one another ? This question has puzzled biologists for decades. In our most recent publication we describe how, using sequence data and sophisticated phylogenetic models, we have resolved this issue. Our analysis shows that the root of the placental mammal phylogeny is the common ancestor of the xenarthra (e.g. armadillo) and the Afrotheria (e.g. elephant) lineages. This root position is known in the literature as the Atlantogenata position. If you are interested in reading more about what data and models we used to come to this conclusion please access our paper (open access) here.

Abstract: Heterogeneity among life traits in mammals has resulted in considerable phylogenetic conflict, particularly concerning the position of the placental root. Layered upon this are gene- and lineage-specific variation in amino acid substitution rates and compositional biases. Life trait variations that may impact upon mutational rates are longevity, metabolic rate, body size and germ line generation time. Over the past 12 years, three main conflicting hypotheses have emerged for the placement of the placental root. These hypotheses place: the Atlantogenata (common ancestor of Xenarthra plus Afrotheria), the Afrotheria, or the Xenarthra as the sister group to all other placental mammals. Model adequacy is critical for accurate tree reconstruction and by failing to account for these compositional and character exchange heterogeneities across the tree and dataset, previous studies have not provided a strongly supported hypothesis for the placental root. For the first time, models that accommodate both tree and dataset heterogeneity have been applied to mammal data. Here we show the impact of accurate model assignment and the importance of datasets in accommodating model parameters while maintaining the power to reject competing hypotheses. Through these sophisticated methods, we demonstrate the importance of model adequacy, dataset power and provide strong support for the Atlantogenata over other competing hypotheses for the position of the placental root. 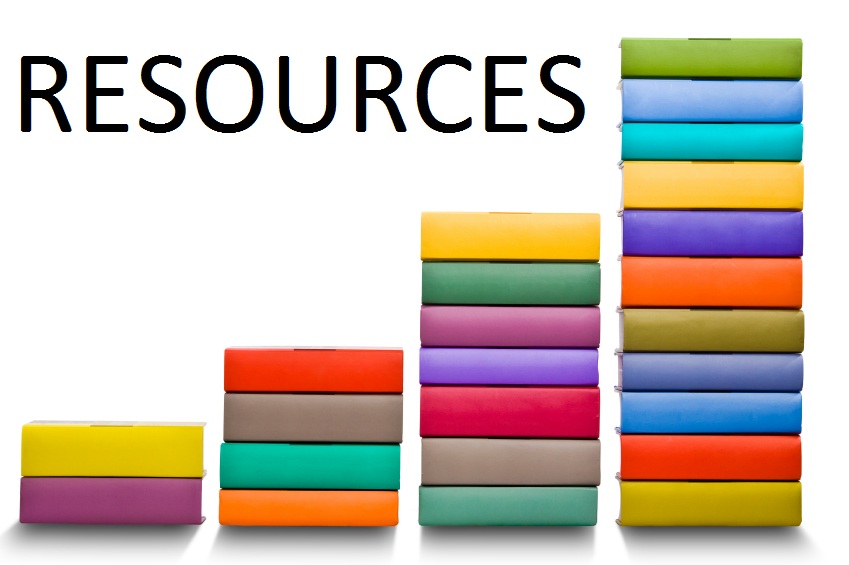 Recent advances in molecular biology and computational power have seen the biomedical sector enter a new era, with corresponding development of Bioinformatics as a major discipline. Generation of enormous amounts of data has driven the need for more advanced storage solutions and shared access through a range of public repositories. The number of such biomedical resources is increasing constantly and mining these large and diverse data sets continues to present real challenges. This paper attempts a general overview of currently available resources, together with remarks on their data mining and analysis capabilities. Of interest here is the recent shift in focus from genetic to epigenetic/epigenomic research and the emergence and extension of resource provision to support this both at local and global scale. Biomedical text and numerical data mining are both considered, the first dealing with automated methods for analyzing research content and information extraction, and the second (broadly) with pattern recognition and prediction. Any summary and selection of resources is inherently limited, given the spectrum available, but the aim is to provide a guideline for the assessment and comparison of currently available provision, particularly as this relates to epigenetics/epigenomics.

Cancer is a common occurrence in multi-cellular organisms and is not strictly limited to the elderly in a population. It is therefore possible that individuals with genotypes that protect against early onset cancers have a selective advantage. In this study the patterns of mutation in the proteins of a well-studied DNA damage response pathway have been examined for evidence of adaptive evolutionary change. Using a maximum likelihood framework and the mammalian species phylogeny, together with codon models of evolution, selective pressure variation across the interacting network of proteins has been detected. The presence of signatures of adaptive evolution in BRCA1 and BRCA2 has already been documented but the effect on the entire network of interacting proteins in this damage response pathway has, until now, been unknown. Positive selection is evident throughout the network with a total of 11 proteins out of 15 examined displaying patterns of substitution characteristic of positive selection. It is also shown here that modern human populations display evidence of an ongoing selective sweep in 9 of these DNA damage repair proteins. The results presented here provide the community with new residues that may be relevant to cancer susceptibility while also highlighting those proteins where human and mouse have undergone lineage-specific functional shift. An understanding of this damage response pathway from an evolutionary perspective will undoubtedly contribute to future cancer treatment approaches.

Retroposition is a widespread phenomenon resulting in the generation of new genes that are initially related to a parent gene via very high coding sequence similarity. We examine the evolutionary fate of four retrogenes generated by such an event; mouse Inpp5f_v2, Mcts2, Nap1l5, and U2af1-rs1. These genes are all subject to the epigenetic phenomenon of parental imprinting. We first provide new data on the age of these retrogene insertions. Using codon-based models of sequence evolution, we show these retrogenes have diverse evolutionary trajectories, including divergence from the parent coding sequence under positive selection pressure, purifying selection pressure maintaining parent-retrogene similarity, and neutral evolution. Examination of the expression pattern of retrogenes shows an atypical, broad pattern across multiple tissues. Protein 3D structure modeling reveals that a positively selected residue in U2af1-rs1, not shared by its parent, may influence protein conformation. Our case-by-case analysis of the evolution of four imprinted retrogenes reveals that this interesting class of imprinted genes, while similar in regulation and sequence characteristics, follow very varied evolutionary paths.

Clostridium difficile is the etiological agent of antibiotic-associated diarrhoea (AAD) and pseudomembranous colitis in humans. The role of the surface layer proteins (SLPs) in this disease has not yet been fully explored. The aim of this study was to investigate a role for SLPs in the recognition of C. difficile and the subsequent activation of the immune system. Bone marrow derived dendritic cells (DCs) exposed to SLPs were assessed for production of inflammatory cytokines, expression of cell surface markers and their ability to generate T helper (Th) cell responses. DCs isolated from C3H/HeN and C3H/HeJ mice were used in order to viagra online discount examine whether SLPs are recognised by TLR4. The role of TLR4 in infection was examined in TLR4-deficient mice. SLPs induced maturation of cialis online pills DCs characterised by production of IL-12, TNFα and IL-10 and expression of MHC class II, CD40, CD80 and CD86. Furthermore, SLP-activated DCs generated Th cells producing IFNγ and IL-17. http://bluewaterropes.com/generic/ SLPs were unable to activate DCs isolated from TLR4-mutant C3H/HeJ mice and failed to induce a subsequent Th cell response. TLR4−/− and Myd88−/−, but not TRIF−/− mice were more susceptible than wild-type mice to C. difficile infection. Furthermore, SLPs activated NFκB, but not IRF3, downstream of TLR4. Our results indicate that SLPs isolated viagra online order from C. difficile can activate innate and adaptive immunity and that these effects are mediated by TLR4, with TLR4 having a functional role in experimental C. difficile infection. This suggests an important role for SLPs in the recognition of C. difficile by the immune system.