The origin of Eukaryotes and the Ring of Life 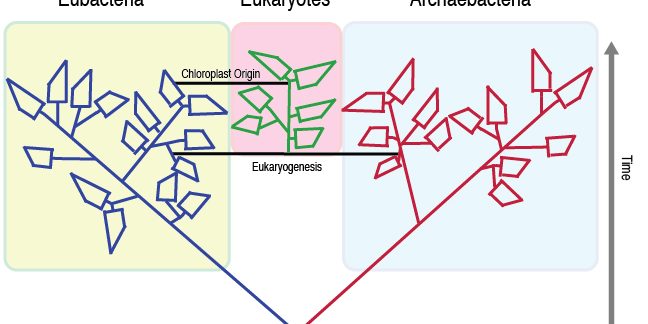 In our latest work on the origin of eukaryotes published in a special issue of Philosophical Transactions of the Royal Society B (link to full issue) compiled and edited by Professor Martin Embley and Dr Tom Williams, we advocate a ‘domain-free’ view of the history of life. Debates about whether there should be two domains or three are essentialist and moot.
“In a pluralistic view of cellular life on the planet, we can see that the merging of eubacterial genes with archaebacterial genes gave rise to the halophiles and indeed it made an enormous contribution to the origins of most of the major groups of Archaebacteria. We see that photosynthesis can only be interpreted as a series of gene flows around the prokaryotic and eukaryotic worlds. We see that eukaryotes have arisen as a consequence of major flows between prokaryotes initially (eukaryogenesis), and later, between a prokaryote group and a eukaryotic group (plastid origins)…Life’s history is complex and we should not try to simplify it to suit our need for orderly nomenclatural systems.”

Sandwalk blog on the special issue can be found here:
http://sandwalk.blogspot.co.uk/2015/08/the-origin-of-eukaryotes-and-ring-of.html